How many wheels does your vehicle run on? If you are using or are looking to get a four-wheel drive car, it pays to know how this system works. Most people know that 4-wheel drive means that all four wheels are powered. However, it may not be as simple as this definition because of the different types of 4WD systems.

In most cases, the force that drives the vehicle is supplied to two wheels. This means that the car is being driven by two wheels, either rear or front, while the others are being driven or dragged. But the drivetrain of some cars is designed to power all the wheels instead of two. These cars are usually referred to as 4WD, 4×4, or four-wheel drive cars. Some four-wheel-drive systems switch from 2WD to 4WD, while others are designed to change from the 4WD default to 2WD.

Let’s look into how 4-wheel drive works to get a clearer picture of this system.

How Does a Four Wheel Drive Work? 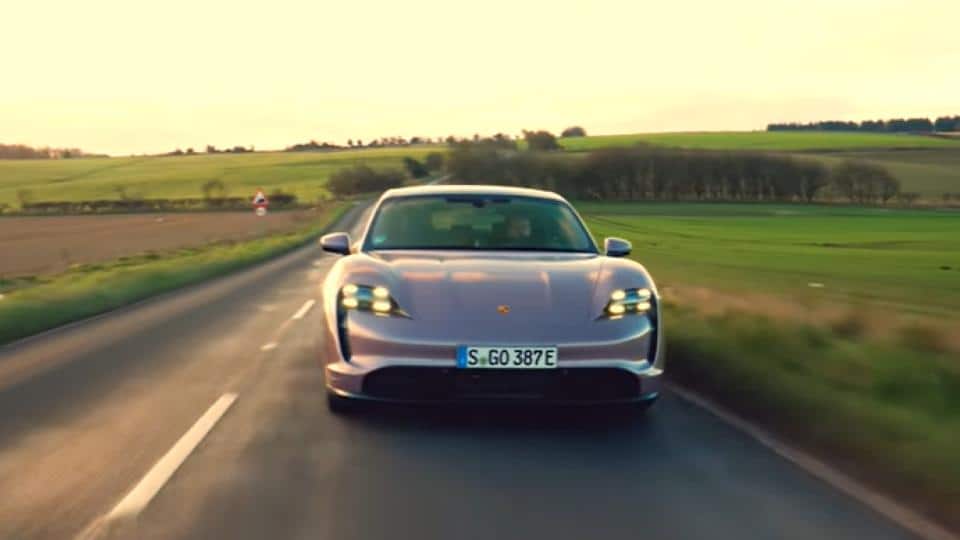 A four-wheel-drive system combines the RWD (rear-wheel drive) and FWD (front-wheel drive) systems acting in tandem. This system makes it possible for the engine to connect and even send power to all the wheels. A 4WD can be active every time or be switched between 2WD and 4WD when required.

4WD refers to specific functions and components and the car’s intended off-road usage. 4WD systems are made for a wide range of markets and are used in different vehicle platforms. So, there are lots of terms used by manufacturers to describe the varying designs and functions.

Some of the most common terms associated with these systems include:

This system is made up of a longitudinally mounted engine that powers all the wheels through the differentials. But before we get into the details of how four-wheel drive works, we need to first elaborate more on the parts of this system.

This system in its simplest form features the following components: 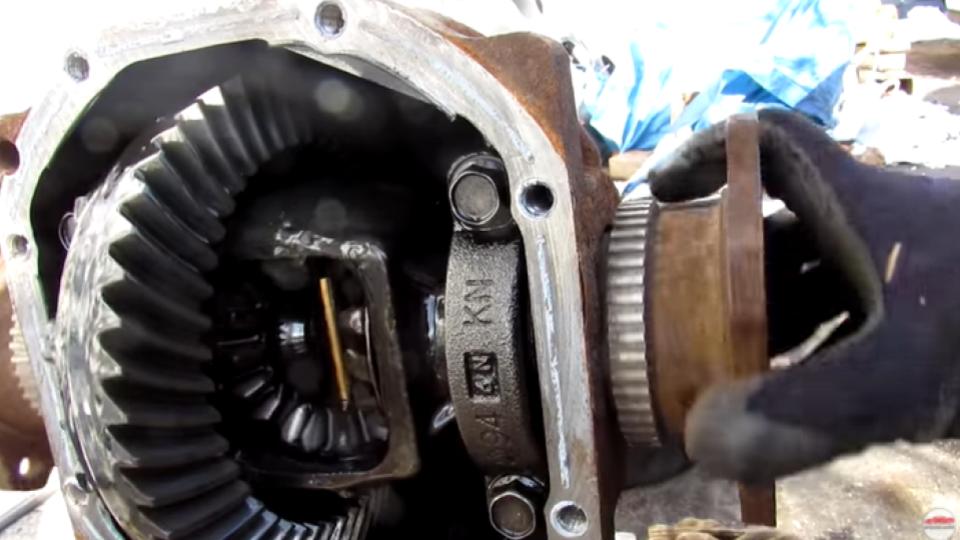 As its name suggests, a differential makes a difference. It controls the amount of power sent to wheels at any given time. The differential features a gear train that allows two wheels connected by the same axis to spin at different speeds. The differential attains this by varying the power delivered to each wheel. A differential can be quite efficient when making a turn.

To better understand differentials, let’s use an example involving a right turn.

When making a turn to the right, the right wheel, which covers less distance, is known as the inner wheel. For the car to turn, the inner wheel has to spin faster than the outer wheel allowing the car to make a smooth turn. Differentials tend to send power to the path with the least resistance, making it a bad option when driving on slippery roads. To avoid this, the differentials prevent power loss to a free-moving wheel.

Thanks to the engine’s position, it can only directly power the rear wheels. Therefore, to power the other wheels, a 4WD car needs a transfer case. This component is connected to the front differentials via the driveshaft, which transfers the power to the front wheels. 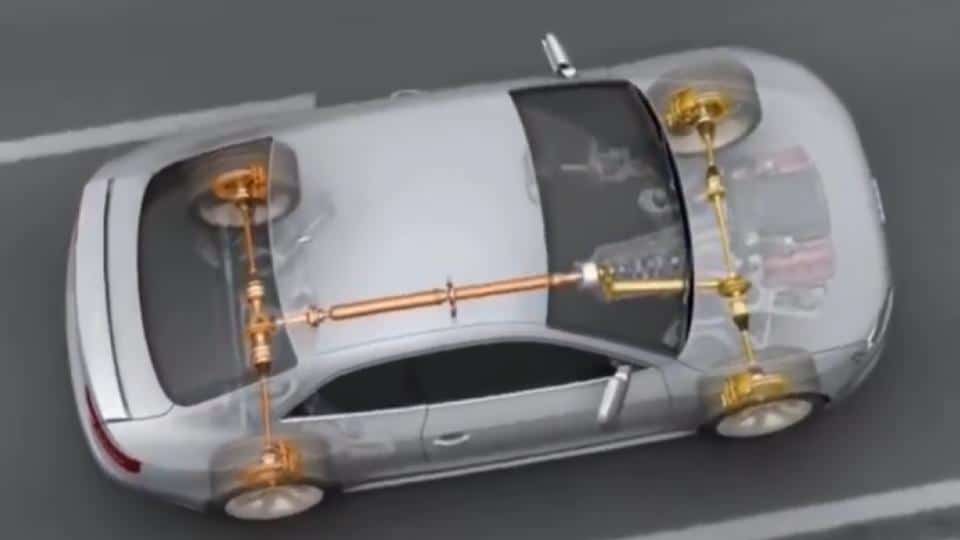 There are different types of 4WD systems in the market that function the same way. In fact, the main difference is whether they need a driver’s interaction or not. A 4WD system works the same way as an AWD system, and when activated, a 4WD will always be rear wheeled. The 4WD always transfers the power to the car’s rear wheels, with the system’s unique computer deciding when to power the front wheels.

How Do Electronic Sensors Activate 4WD?

The transfer case has a speed sensor that calculates and measures the output shaft’s speed. The sensor also measures the speed of the rear wheels vs. the front wheels. Once this sensor detects the change in rotational speed in one of the wheels due to loss of traction, it engages the 4WD.

Normally, the wheel that loses traction tends to spin faster than the others. When this happens, the sensor signals the motor which engages the fork in the transfer box resulting in the 4H mode being activated. With the 4H mode activated, power will be sent to the rear and front wheels to help improve stability and traction on a slippery road, for example.

How Does the Electric Motor Help the Wheels Regain Traction?

After receiving the signal from the sensor, the motor activates the fork in the transfer case. It presses the fork onto the metal plates and starts synchronizing the rotating speed of the two driveshafts. The fork applies a lot of pressure on the metal and friction discs linked to the fore wheels’ driveshaft. After applying enough pressure, it synchronizes the rotational speed of the rear and front driveshafts. And this will help the wheel that lost traction regain it.

This process happens very fast, and even the driver doesn’t notice it. The process of switching from 2WD to 4WD is controlled by a unique system that doesn’t need the driver’s interaction. This computerized system engages and disengages very quickly when driving on a partially low traction road.

How Does a Temporary 4WD System Differ From Automatic and Full-Time 4WD Systems?

Unlike the automatic and full-time 4WD systems, the part-time 4WD works on-demand. This means that it has to be activated by the driver using the shift lever. And failure to do so can result in the drivetrain getting damaged. The full-time system can function on all surfaces, while the part-time option works best on slippery roads.

The difference between the automatic 4WD and the others is that it doesn’t have the 2H option. The full-time 4WD car can be used as a permanent 4-wheeled car, or it can switch back to temporary 4WD and function as a 2WD.

When to Use the Full-Time or Temporary 4-Wheel Drive Systems?

The 4WD auto is a unique invention that doesn’t require the driver’s intervention. Since it is automated, this system gives you peace of mind when one of your wheels loses traction. Plus, they come with diff lockers to help you with difficult off-road driving. So when will your car engage 4WD auto? Well, this system comes in handy when dealing with a road with both high and low traction surfaces like:

But if your car has a temporary 4WD system, you will have to assess the road before engaging the 4-wheel drive. And when traction is regained, you can return to the 2WD mode to avoid damaging your car. Alternatively, you can leave the full-time 4WD mode on the whole ride, and your car will be ok. After all, with the 4WD mode turned on, you will never run the risk of the drivetrain damaging the wheels.

You might also want to know how to put Jeep Cherokee in 4WD.

A 4WD system can help you drive smoothly on a slippery surface that would have been challenging with a 2WD car. This system can help power the wheel that loses traction when driving on a slippery road that has been covered with snow. When the electric sensor detects a change in rotational speed in one of the wheels, it signals the motor. The electric motor then engages the fork resulting in the activation of the 4H mode.