If you’ve ever driven a truck long enough, you know it’s only a matter of time before its frame starts to go bad. This can be in the form of dents, scratches, or that dreaded rust.

There are many ways to deal with a rusty truck frame, the least of which is simply scraping off surfaces—a crude method. However, thanks to advancements in a number of chemical technologies, you can remove thick layers of rust—and even reveal a near-pristine surface beneath—using great liquid rust converters/removers.
It is not recommended to dive into these tough jobs head first without the proper tools. A rust remover, such as the items listed below, can provide you with the right conditions to get the job done effectively.

At A Glance: Our Top 3 Picks for Rust Converters for Truck Frame

The following article will closely analyze the products offered by three popular brands: POR-15 (whose rust preventative paint we’ve already reviewed), Ospho, and Corroseal. Collectively, these products can be used for the same challenge of converting rust on your truck frame.

However, there are also a number of nuances and differences that separate each from the others. These specifications will be broken down and their varying applications revealed. 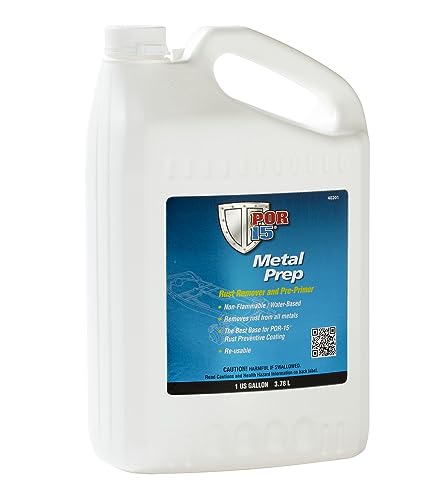 The key essential features found in POR-15 are as follows. First, you are getting a product that is non-flammable and water-based. The benefits of these cannot be overstated. For the obvious reasons, being non-flammable provides an extra layer of safety when dealing with what are already very hazardous chemicals.

However, the fact that POR-15 Metal Prep is water-based creates not only a system for safety, but also a framework that is much less toxic overall. Once these two basepoints are met, the outcome with a healthier experience overall, relatively speaking.

In consideration of this, though, “water-based” does not mean “weak.” In fact, the advancement of many different formulas has allowed for a situation in which the underlying factors are not limited to the growth outcomes. For example, chemical compounds that are water-based can still be very powerful, even though they have a wide-range of potentially toxic ingredients.

Another feature of this product is the fact that it is suitable for all metal types.
The outcome is consistent which leads to one of its next key features: it is reusable. Value in the world of rust removers can vary wildly. Different formulas, adverse chemical combinations, and other factors could have you spending lots of money. However, the reusability of the POR-15 formula means you can take multiple efforts with one small batch.

The POR-15 Metal Prep is recommended because it is a powerful rust converter and is ergonomically-made. The fact that it is water-based allowed for an added layer of safety and security. The potency of the formula, though, ensures that these values are maintained. Having a water-based formula allows for great flexibility while working without sacrifice much on the strength.

If the intention is to apply paint to a surface that just had its rust removed, then this can be accomplished with the Ospho metal treatment formula. Effectively, it acts as both a rust remover, but also a preventative liquid that treat the surface in such a way that prepares it for painting.

In this regard, it is not so much a rust remover as it is a preparing treatment for surfaces to be painted. This is a critical differentiation that must be noted. Generally, many rust removers are so powerful that they can simply be applied, left to sit for a certain period of time, and then wiped away, taking the rust off with it.
When this is the case, there is very little need for extra manual labor like rubbing or scratching with abrasive tools like a wire brush. Fundamentally, this is the benefit associated with such formulas and they cannot be understated.

Technically, though, these vary substantially when compared to other products like Ospho’s metal treatment. This product technically can remove rust, but it is a much more labor intensive process. Instead, this formula is more designed for creating a stable surface for adding a layer of paint on once the rust is removed.

There are many different ways to treat a rusty truck frame. Simply removing the rust serves its own purposes, especially if you are simply trying to restore its appearance to its original state. In such cases, a standard all-purpose rust remover will do the job.

Being able to add a new layer of paint atop the original surface once the rust has been removed can help offer you new areas of customization. In that regard, the options are fairly limitless. Whether it is a different color that is desired or simply adding a protective layer of laminate, the choices know few bounds.

As far as rust-removers and paint preppers are concerned, Ospho’s product is recommended. Paint will stay long and close with long term capacity to endure various weather conditions. Without that essential underlying layer for your paint to rest on, it can begin to wear and tear far too quickly. 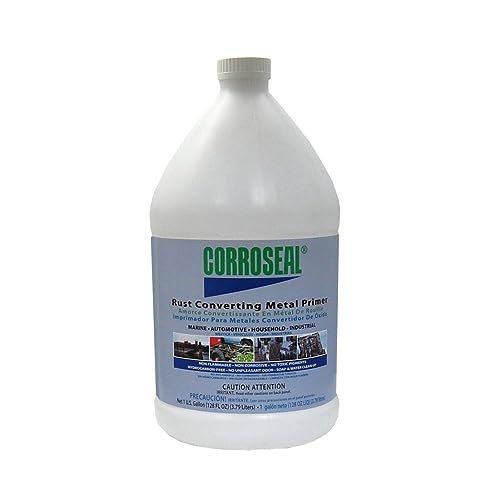 So far, we’ve learned about a rust remover and a rust paint prepper. This time, though, the Corroseal brand of product acts as something quite different: a rust converter.
Essentially, the difference here between all the others is that the rust is not simply removed to make way for underlying surfaces or a new layer of paint. Instead, the rust itself is harnessed as part of the healing and curing process.

The outcome is a much more rigid and durable surface where the rust itself has been converted and is now part of the overall truck frame that you’re working on.
This comes with a number of unique benefits, all of which are not limited by the factors that can be applied in any given situation. For example, Corroseal does not find limitation in its ability to remove rust. The reason is simple: there is no need to scrape it all away when it can be used to create a much more durable surface.

The implications of this are quite extensive and cannot be ignored when considering and comparing it to other products. Simply put, there is no need to spend excess time grinding away with a wire brush or wiping away old layers. Instead, the formula gets to work instantly, slowly converting the unwanted rust into a chemically-altered state. Once this is achieved, the conditions can be painted over or simply left as is.

One of the key benefits of the Corroseal product is the fact that priming, painting, and rust conversion occurs in one step. Application can be as easy as simply rolling it on or even spraying it. Spray applications work in their own right, though brush it on can be even more effective. Placing the coating on the rusted truck frame or surface is uniquely challenging to begin with. With Corroseal, though, the situation is not limited by the variable that are usually considered, not to mention weather and temperature.

Corroseal’s rust converter was specifically designed for use in marine environments. This can mean boats or other aquatic-based vehicles. Ironically, though, these tough underwater conditions can still be applied to land and the benefits to repairing your rusted truck frame are undeniable. As a result, the formula is a truly powerful approach to dealing with a fairly everyday challenge.

At its core, the rust conversion process is chemical. This means that the rust is actually changing its chemical structure to become something quite different from its original state. As a result, you are getting a new surface that did not require much efforts on your part to change. This is because the chemical compounds in the formula do most of the heavy lifting for you.

Once these basic conditions are achieved, you can actually watch as the rusted surface on your truck starts to change colors. You may see it turn to black, indicating that the surface is fully or partially converted. In either instance, though, the result is the same: a major change has taken place across the truck’s paneling.

After the rust has been converted, the formula is already at work priming the surface. It really does work that simply, which is surprising considering it is simply a bottle of fluids working independently on the rust. By necessity, this is what a “rust converter” is designed to do, and it accomplishes exactly that.

The fact that all of this can be accomplished in one step if, of course, one of the key attracting features of Corroseal. Still, it can create a certain level of doubt, but the product nonetheless works as advertised. If you are seeking a one-step solution and are not looking for any specific range of customization to the job, than this could be the product that suits your needs.

There are a number of ways to deal with a rusty truck frame. You can start with the standard rust-removal process using POR-15. Alternatively, you can find a middle-ground with a surface prepper by Ospho. On an entirely other level, though, you can convert the rust with a formula like Corroseal.
In either case, you will be able to meet your goals to the precise outcomes you need. Rust can be a real challenge, but with the right tools, your truck frame can look good as new. This is true no matter the rust converted you ultimately choose, and irrespective of the kind of truck frame you’re dealing with.

You may also read our other related articles on this topic: